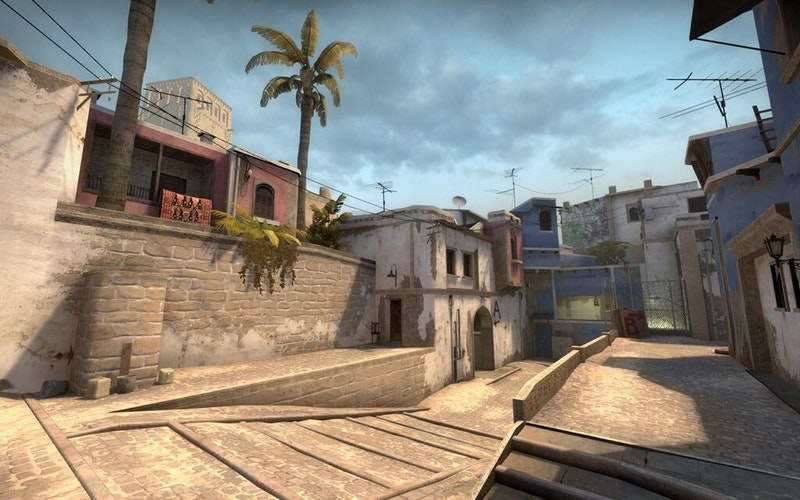 How to play on the map de_mirage

What you should know about de_mirage map

Map de_mirage is similar in many ways to de_dust2. The space here can also be divided into three offensive lines – one for points A and B, and a sniper favorite “center” in the middle. Zone A is the closest to the starting positions of the teams, so one of the most popular attack tactics is a quick assault of this point. If properly coordinated, the terrorists can attack from two flanks at once: the shortest way down and the bypass – through the so-called palace (a section with columns inside the room, ending with a boardwalk bridge leading to A).

For maximum efficiency, it is better to attack through both passages at once, because each of them separately is quite dangerous for terrorists. Thus, SWAT snipers can almost instantly take the lower entrance under their sights – for this they need to take only a few steps from the starting position.

The way through the “palace” is safer, but noticeably longer: the terrorists can ambush the exit from the room. In addition, despite the fact that the second floor offers an excellent view of the entire area A, there are no shelters – you become just as vulnerable as the opponents below.

Zone B is very similar to the market from the de_italy map – the place for laying a bomb is surrounded by four brick corners, behind which it is very convenient for terrorists to hide from enemy fire. In addition, a Special Forces player, if he is ambushed by a colleague, can ambush the boxes standing in each of the corners. From the starting point of the counterterrorists, the way to B lies through the “store” – an interior room with two exits (through a door or window). The other two important elements are a white van, from which you can jump on the balcony of the “apartment”, and the exit to B from the center.

It is through the “apartments” that the terrorists most often prefer to attack point B. To get there, you need to go to the right from the starting position – there you can either move to the center, or climb through the boxes in the inner room on the second floor. The last stretch of the apartment is most dangerous – counter-terrorists may run to the van faster than their opponents, so often a long corridor becomes an arena for sniper duels.

Even if there are no enemies on the roof of the van (or you killed them all), it is too early to relax – Special Forces have plenty of places for an ambush, so before you go down, always watch the windows overlooking the B. And already on the ground (before laying the bomb) will not hurt to check the favorite places of the camper – near the van, in the far corner, in the “store” and on the boxes in the center. When the explosives are activated, it is better to hide yourself in these same places, waiting for guests.

In addition to the “store,” from their starting position, the terrorists can go to the “sniper” balcony in the central part of the map – to do this, you need to shoot the boards that cover a small hole in the wall. If there are no enemies there, you may return to A – by jumping down and bypassing the side, or back – through the starting position.

If you want to diversify your game and enjoy the gameplay more and more every day, it is recommended to visit this site https://csgo.net/faq. Here you can find many attractive things to improve the game and make it more attractive for you.